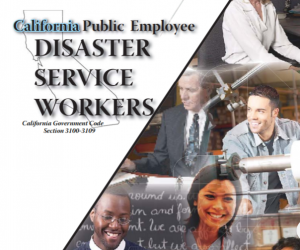 "It is hereby declared that the protection of the health and safety and preservation of the lives and property of the people of the state from the effects of natural, man-made, or war-caused emergencies which result in conditions of disaster or extreme peril to life, property, and resources is of paramount state importance...in protection of its citizens and resources, all public employees are hereby declared to be disaster service workers...

All disaster service workers shall, before they enter upon the duties of their
employment, take and subscribe to the oath or affirmation..."

As a California city, county, or state agency or public district employee, you may be called upon as a disaster service worker in the event of an emergency.

What does "disaster service" mean?

Disaster service means all activities authorized by and carried out pursuant to the California Emergency Services Act to aid in the response and recovery phases of a disaster or emergency, including approved and documented training necessary or proper to engage in such activities.

Who is included in the Disaster Service Worker status?

Pursuant to the California Emergency Services Act, any person employed by a county, city, state agency or public district in California is a public employee and considered a Disaster Service Worker.

What is the oath or affirmation referred to in the government code?

Before entering upon the duties of employment, all public employees take and subscribe to the oath or affirmation set forth in the California Constitution that declares them to be Disaster Service Workers in time of need.  The oath or affirmation reaffirms an employee’s willingness to support and defend the Constitution of the United States and the Constitution of the State of California.  City of San Rafael employees sign an Oath or Affirmation of Allegiance during the hiring process, and documentation of the Affirmation is kept in the employee’s personnel file.

What does being a Disaster Service Worker mean to me?

As a Disaster Service Worker you may be asked to carry on with your work as usual, or you may be asked to do something completely different than your everyday job. There are many different ways to assist during a disaster because each situation is unique. You may be assigned and trained to do a specific disaster response job such as working in the City’s Emergency Operations Center (EOC); you may be called upon to assist your Department or other City Departments with their response efforts; or you may be assisting countywide efforts through the Marin County EOC or nonprofit disaster response agencies such as the American Red Cross and Salvation Army.

DSW assignments are based on the needs of the Emergency Operations Center, departmental operations, employee skills and qualifications, and employee availability.  You may receive a DSW assignment directly from the EOC or through your supervisor.  Employees are typically assigned a 2-week deployment, but the duration will vary depending on operational needs.  Daily or hourly shifts may be different from your regular work schedule.  When you are deployed as a Disaster Service Worker your right to breaks and lunch still stand. Please discuss specific break times with your DSW Section Supervisor.

What is the scope of duties I may be asked to perform as a Disaster Service Worker?

Disaster service is designed to aid in the response and recovery phases of a disaster or emergency. You are considered to be acting within the scope of disaster service duties when performing any act contributing to the protection of life or property or mitigating the effects of an emergency or potential emergency while under the supervision of any unit of the City of San Rafael Emergency Operations Center (EOC).

You are also considered to be acting within the scope of disaster service duties while under the supervision and direction of other State, Federal, and volunteer agencies responding to the disaster such as Marin County or the American Red Cross.

Examples of general disaster service duties include clerical support, answering telephones, delivering supplies, running messages, managing volunteers, staffing barricades, working in a Red Cross shelter, food preparation and serving, interpreting, and filling sandbags.  You will not be assigned DSW work for which you are not qualified or unable to do without adequate training or direction.

Can Disaster Service Workers be sued for actions taken while performing duties?

Public employee disaster service workers for nonprofit organizations and government cannot be held liable for their actions during a disaster while acting within the scope of their responsibilities.

What if public employees are injured while acting as Disaster Service Workers?

Claims sustained by public employees while performing disaster services shall be filed as worker compensation claims under the same authorities and guidelines as with all employees within the City of San Rafael.  For more information see the City's Workers Compensation Policy.

Your Duties as a Disaster Service Worker