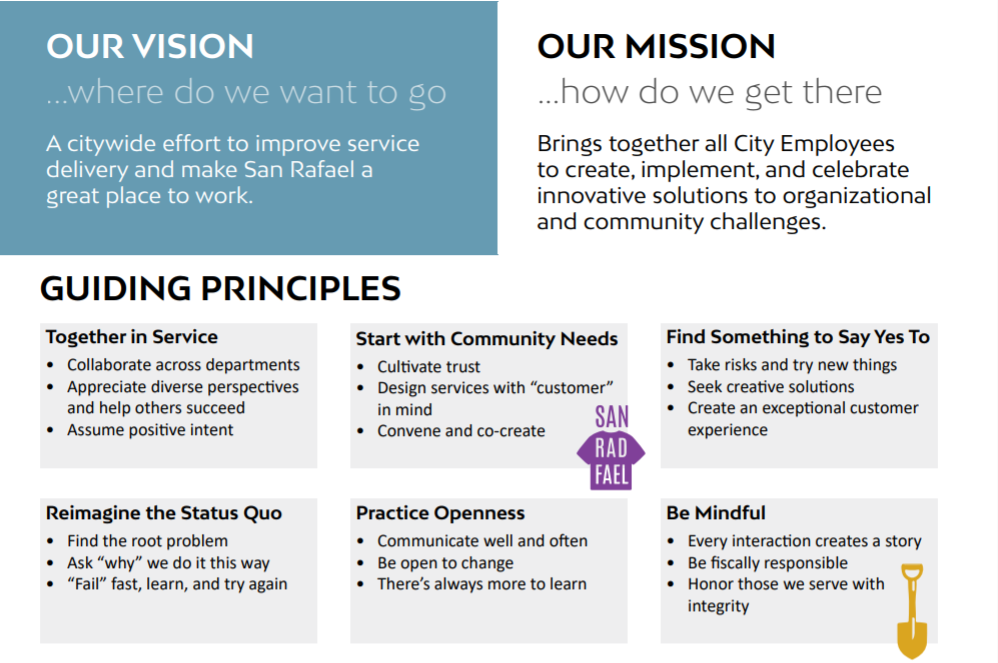 When we brought the idea of YouTube live chat as an option for public participation, it would have been an easy “no” in most cities. But on our team, we have honestly taken the guiding principles and made them apart of our everyday thought process, naturally.

A true collaboration, we created a team including the City Clerk’s Office, Digital Service & Open Government, the City Attorney’s Office, & Public Works. But it wouldn’t have been possible without Council support, director team support and all department staff report presenters. All of you helped us succeed, and if that isn’t Togethery, I don’t know what is!

Instead, we provided a true alternative to participating in-person. We allowed people to provide comments in real-time and let their opinions shift as the discussion changed. We had folks who emailed in advance also submit public comment on YouTube because they wanted to answer questions or offer differing views that their pre-meeting emailed comments didn’t address.

Our team thought of everything. What if people aren’t comfortable on YouTube? Provide them with a conference call number and blast it on the bottom of the video and Nextdoor.  What if key folks don’t know how to participate? Have staff report authors and Clerk’s office reach out to key stakeholders and explain how the process will go for the evening. What if people can’t figure out either? It’s fine – accept their comments in advance and read them during the live comment portion. It’s the first time for all of us!

Our team was constantly in communication. Only a couple days before the meeting, Vinh’s baby Lucas ‘decided’ to come into the world (yay – he came early for the meeting and was for sure 1 of the 83 views on YouTube). We pivoted, assigning Thomas Wong as the lead on the project and working closely with Rebecca and Sean. We had back-up plans just in-case we failed, and we accepted it wouldn’t be perfect. We knew we would learn a lot and be in a great position to iterate. And most importantly, we tested….and tested and tested and tested. Tested Friday, tested Saturday, tested Sunday, tested Monday….

Find Something to Say Yes To

Like I mentioned, this could have been shut down before it ever started. But that isn’t our culture, and that hasn’t always been the case. Jim, the Mayor, or Digital could have all easily said “no”. Heck, I almost said no and cancelled the meeting on Friday when I lost my chambers security blanket, Vinh. But we all took risks, we sought creative solutions for virtual public participation and I believe we created an exceptional customer experience!

Want to hear something crazy – this cost the City nineteen dollars. The City Clerk’s office goals and objectives for next year was to explore other ways to stream our meetings, and leave Granicus. If this continues it would ultimately save the City $30,000 annually.

I am always proud of our team, but last night was one I don’t think I will ever forget.